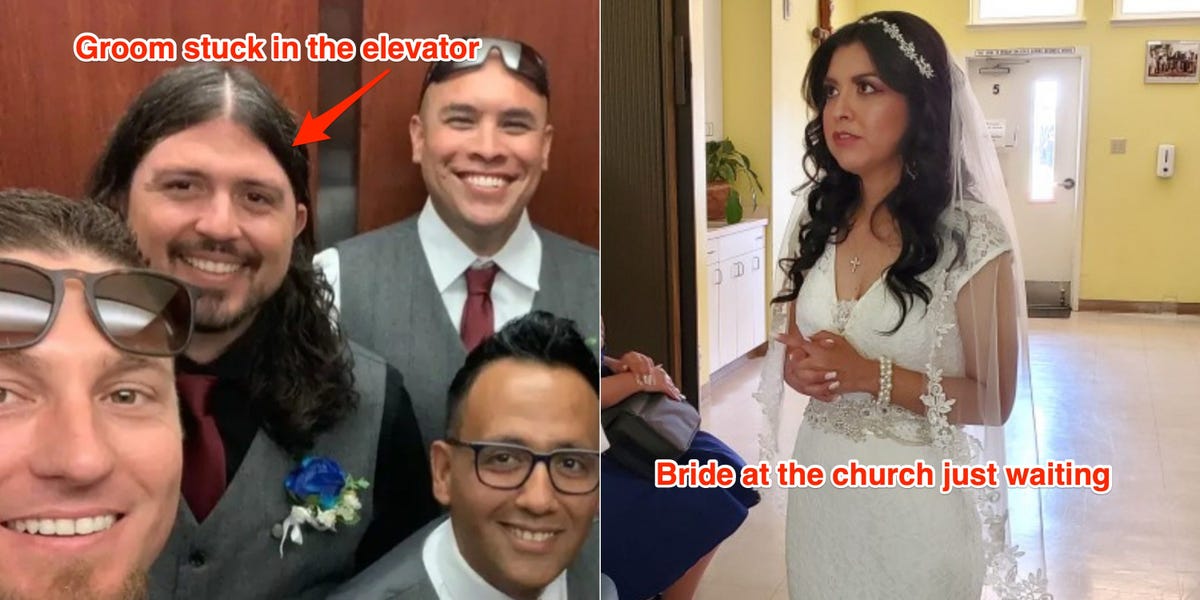 Groom left bride at altar after getting stuck in elevator

Misty Valdez had planned her wedding day to the minute, but nothing went as planned.

She and her husband, Brandon Valdez, were due to get married on May 7 at 1:30 p.m. at a small church in Fresno, Calif. Misty told Insider that to keep up the tradition of not seeing each other before the ceremony, Brandon spent the night at a local hotel, the Best Western Clovis Cole.

On the day of the wedding, Brandon’s groomsmen met him at the Best Western to get ready while Misty and her bridesmaids did the same at her house. Everything was going well until Brandon and his groomsmen entered the hotel elevator.

“We get into the elevator to go down, and maybe halfway down the second floor, the elevator just jumps up and stops,” Brandon said. “We knew it was blocked because the floor counter showed we were still on the third floor.”

Brandon, his five groomsmen and one groomsman’s son were trapped inside the elevator. One of the groomsmen pressed the panic button and someone from reception said he would be willing to help. To pass the time, they luckily had supplies: the groomsmen had packed a cooler with White Claws which they planned to drink after the church ceremony. So Brandon decided to open it while they waited.

But help from the hotel did not come. After 20 minutes, another groomsman decided to call the fire department. There was a wedding to do.

When firefighters arrived, they had to manually pull the elevator to the ground to get the group out.

“At one point we noticed the doors were coming off, so we took it upon ourselves to try and open them like you see in the movies,” Brandon said.

Meanwhile at church, Misty had no idea that Brandon and his groomsmen were stuck in an elevator. He was simply told that they were late.

“I even asked one of my bridesmaids if Brandon had cold feet,” Misty said. “As they knew what was going on, they assured me that was not the case.”

Then Misty’s priest came over and told her it was a good sign that things had gotten behind. She finally calmed down, she said.

Misty told Insider that she didn’t find out the real reason the men were late until she and Brandon were both standing at the altar.

“Once I got to the altar, Brandon just looked pissed off, and that’s when he whispered to me that he got stuck in the hotel elevator,” a- she declared. “I was shocked.”

Because Brandon and the groomsmen arrived at the church so late, the newlyweds wasted precious time taking the traditional photos with their family and wedding parties.

“We both missed photos with our grandmothers, which was disappointing,” Misty said.

Brandon also felt like he missed out on the emotions of the day. “I couldn’t be in the moment because everything was rushed,” he said.

The elevator incident also further disrupted the wedding celebration. The couple ended up being two hours late at their reception. When they arrived, some of their vendors had already left and they had to pay extra for those who stayed, Misty said.

For the day not to go as planned, it is particularly hard. Misty and Brandon have been through tough times since Misty was diagnosed with Lyme disease in July 2020. It was disappointing that today turned out badly, Misty said.

“There was a lot to do that day, and despite the elevator situation, nothing could stop us from getting married,” she said. “We worked so hard. When I said ‘in sickness and in good health’ in my vows, it was moving because we lived it.”

The day after the wedding, Misty contacted Best Western Clovis Cole about compensation for the truncated wedding day due to the elevator malfunction. Misty told Insider that a manager initially said there was nothing they could do before offering a discounted price on one of their suites.

“The manager didn’t apologize to me or even act like she was sorry for what happened,” she said. “I just wanted some kind of accountability. We weren’t asking for much.”

After Misty told Brandon that the hotel did not apologize for what happened, he contacted their local ABC News station, which first covered the story. After their story aired on May 11someone from Best Western’s corporate office contacted the couple and offered them a $500 gift card.

A Best Western representative confirmed to Insider that they gave the couple the gift card, which can be used at any property in the hotel chain.

“On behalf of the entire Best Western Hotels & Resorts family, we would like to extend our sincere congratulations to Misty and Brandon Valdez on this special stage of their lives. Whether used for their honeymoon or future travels, we hope Misty and Brandon will create special memories that will last a lifetime,” the statement read.

Misty said they were happy with the hotel’s response after the story went viral, as it is money the newlyweds could use for their honeymoon.

“We laugh about it now,” she said. “It’s a story we can tell our children one day.”