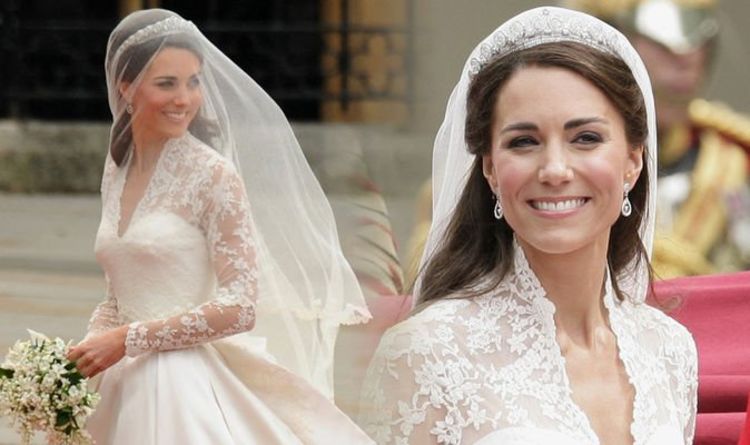 The preparation for any royal wedding is always huge, and royal fans are always desperate to know what the bride will be wearing on her big day. Kate Middleton’s timeless wedding dress was designed by Sarah Burton of British fashion label Alexander McQueen. And when the dress was revealed on Prince William and Kate’s wedding day in 2011, the dress was a huge hit with the public. Express.co.uk takes a look at some of the unique aspects of Kate’s gorgeous royal wedding ensemble.

When Kate Middleton arrived at Westminster Abbey for her wedding ceremony, her sister Pippa Middleton was on hand to help her with her dress.

Kate’s dress featured a nearly nine-foot-long train covered in floral designs, and it was worn by Pippa as the bride walked towards the abbey.

Kate’s dress, however, had a much shorter train than the dress worn by Lady Diana Spencer in 1981, which measured a staggering 25 feet.

Workers washed their hands every 30 minutes when handling lace

The Royal School of Needlework helped Alexander McQueen’s team cut the patterns for the dress from lace fabrics, and the workers were meticulous in making sure the dress remained pristine for the big day.

The Royal Family website explains: “The Royal School of Needlework (RSN), based at Hampton Court Palace, helped Alexander McQueen’s team precisely cut the delicate patterns of the lace fabrics and position the patterns. lace with precision in the new design.

“The lace patterns were pinned, ‘framed’ and applied with topstitching every two to three millimeters around each lace pattern.

“Workers washed their hands every thirty minutes to keep the lace and threads immaculate, and the needles were renewed every three hours, to keep them crisp and clean.”

DO NOT MISS :
Kate’s 40th birthday plans ‘much lower key’ than Meghan Markle’s [ANALYSIS]
How Camilla follows in Meghan and Kate’s footsteps with new role [INSIGHT]
How Camilla got the prestigious title of Queen before Sophie and Kate [INTERVIEW]

As per tradition, the Queen loaned Kate a tiara from her personal jewelry collection for her wedding in 2011.

Kate wore the Cartier Halo Tiara, which was purchased by the future King George VI for his wife, the future Queen Elizabeth the Queen Mother.

The then Princess Elizabeth received the tiara on her 18th birthday, although since taking over the throne, the Queen does not wear the tiara in public.

Kate paid a subtle tribute to William with her bouquet

Kate’s bridal bouquet included lily of the valley, hyacinth, ivy and myrtle – the latter being collected at Osborne House on the Isle of Wight.

Kate’s bouquet included sprigs of a myrtle planted by Queen Victoria in 1845, in addition to sprigs of a plant from the myrtle used in the Queen’s 1947 wedding bouquet.

In the bouquet, Kate also chose to present “Sweet William” as a tribute to her new husband, the flower symbolizing gallantry.