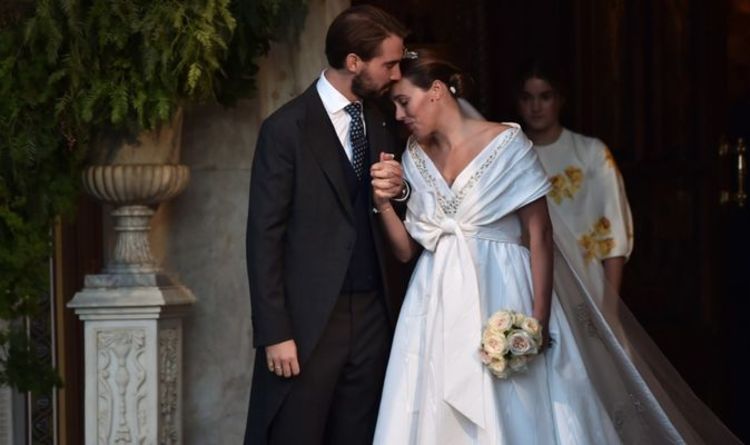 Wedding of Nina Flohr and Prince Philippos: the bride dazzles in a white Chanel dress

The Swiss businesswoman opted for a traditional white dress from none other than Chanel.

The dress featured a V-neckline and was cinched at the waist with a neatly tied knot.

A long veil was attached to the dress and held in place by Nina’s rhinestone tiara and low bun hairstyle.

The groom wore a gray suit and a navy and white polka dot tie.

Prince Philippos is the youngest child of the last king and queen of Greece, Constantine II and Anne-Marie.

It is named after his cousin and godfather, the Duke of Edinburgh.

The late Princess Diana was also his godmother, whom he saw often as he grew up in London with his four older siblings, Princess Alexia, Crown Prince Pavlos, Prince Nikolaos and Princess Theodora.

Philippos and Nina were the first royal couple to get married in the Metropolitan Cathedral yesterday since the wedding of the King and Queen of Greece in 1964.

Although Nina’s dress is Chanel, she paid homage to her new mother-in-law by wearing a tiara belonging to her on her special day.

The antique bodice tiara was gifted to Anne-Marie on her 18th birthday by her mother, Queen Ingrid of Denmark.

Made from a pearl and diamond bodice brooch, the tiara was inherited by Ingrid from her grandmother, Queen Victoria of Sweden.

Anne-Marie has barely worn the tiara over the years, but it has been loaned to other members of the royal family.

In 1995, the jewel was worn by Crown Princess Marie Chantal for her marriage to Anne-Marie’s eldest son, Pavlos.

It was also worn by the youngest daughter of the King and Queen of Greece, Princess Theodora.

How do you price destination wedding photography?

Desi groom is delighted to wear makeup for the wedding. The bride’s reaction is now a viral video